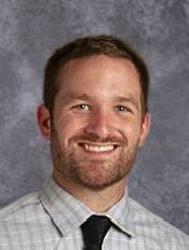 Our faculty are dedicated to our students! Many of them don't only teach - they also coach or advise clubs as well.

To celebrate our coaches who also teach or are staff at CDH, we're sharing a Q&A with each of them over the next few months! Today, meet Joe Miley '11, Football Coach and Learning Specialist.

Did you participate in the sport you coach as a student-athlete?
Yes, I played football at CDH from 2007-2010.

What made you decide to coach?
I had a great experience playing sports at CDH and have always liked being part of a team. I learned so much from my coaches growing up and felt that coaching could be an opportunity for me to give back while being part of something I enjoy. I remember when I was a freshman in college and Jim O’Neill asked me to help with a 9th-grade baseball team. That experience eventually led me to become a manager of the baseball team at Saint Mary’s University in Winona. Knowing that I wanted to continue coaching, I tried to soak up everything I could from the coaching staff. After the college season, I would coach CDH teams and camps during the summers. Once I graduated, I started coaching basketball and football, too.

How long have you been coaching here at CDH?
I have been coaching football for 6 years. I also coached baseball for 7 years, basketball for 2, and softball for 1.

What do you love about coaching?
I love being part of a team and working with others toward a shared goal. I love when athletes and coaches are able to set aside personal desires and take on whatever role they need to for the betterment of the team. I love watching young people become leaders, serving their teammates and helping them improve.

I also really like coaching with friends. I have made some lifelong friends through coaching – there is always something interesting going on to talk about.

How does your experience as a coach improve your teaching?
Coaching helps me feel more connected to the students, and I think they might feel more connected to me, too. We get to see a different side of each other and experience some good times and also some adversity together. From my experience, when I know my students on a more personal level or they know me a little better, it leads to breakthroughs. I’m sure there is a higher level of trust and listening that takes place because of the relationship.

How does your experience as a teacher improve your coaching?
I think at its core, coaching is teaching. Working with students in one-on-one and small group settings in the Learning Lab really helps me in instructing skills and explaining concepts to athletes, especially if they may be struggling with it. I also think it helps me with patience and understanding that some student-athletes may need a different approach, further instruction, or more time to develop or learn. Being in the school building with the student-athletes also gives me an idea of what their day might have been like and what they might need in practice – it is helpful to remember that the time spent on the field/court might be the best part of their day.

Do you have any favorite memories from your time coaching?