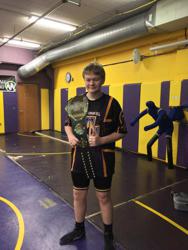 Benny Williams with his well-earned Wrestler of the Week belt!

The Cretin-Derham Hall wrestling team defeated Henry Sibley on December 20, 2018, in dramatic come-from-behind fashion. With several wrestlers unavailable due to injury and illness, it took a lot of determination from everyone in the lineup to overcome the open weight classes.

The dual started with Henry Sibley jumping out to an 18-0 lead due to three forfeits from the Raiders in the first three weight classes. Senior captain Danny Vrtis got the Raiders on the scoreboard when he bumped up a weight class and was able to pin his opponent in the second period.

After a fourth forfeit to Henry Sibley at 132 pounds, junior Maxwell Fronda stepped out to the mat, also wrestling up a weight class. Even though he was losing 7-0 at the start of the third period, he could feel his opponent starting to tire. Maxwell was able to get a takedown and transition right into a tight headlock from the takedown. His opponent injury defaulted before Maxwell could secure the pin, which still gave the Raiders the maximum of 6 team points to make the score 24-12 in favor of the Warriors.

Henry Sibley earned a pin at 145 pounds, and then senior captain Mundo Villalva Lijo racked up two takedowns and a reversal to build his lead before earning the fall in the second period. This set up a showdown at 160 pounds that would not disappoint the Raiders fans. Sophomore Carey Vanier, Jr. stepped out against one of Henry Sibley’s best wrestlers. Despite giving up the first takedown, he battled back and was able to secure the win by fall midway through the second period.

Many times in dual meets, earning pins makes a huge difference. On the other side of the coin, however, losing matches by points, instead of getting pinned can put a team over the top too. Sophomore Zach Steigauf and junior captain Isaac Enriquez both wrestled hard in losing efforts, but were able to avoid giving up any bonus points to limit the damage, even though they both bumped up a weight class. This meant the Raiders were only down by 12 points with three weight classes to go.

Sophomore Cage Linton bumped up to 195 pounds and took control of his match right out of the gates with four, first period takedowns. Even though he was facing a heavier opponent, Cage was able to horse him over to his back early in the second period and get the pin, bringing the match score to 36-30 in favor of Henry Sibley.

Henry Sibley had weighed in a heavyweight for the meet, but he didn’t wrestle in the second round, and didn’t appear to be warming up for a match in this round. So the coaching staff took a gamble, and decided to move junior Nick Owsley up to heavyweight to cover what apparently would be a forfeit from the Warriors. But before that could happen, the dual meet was resting squarely on the shoulders of sophomore Benny Williams who would bump up to 220 pounds to fill Nick’s spot.

Benny was giving up almost 30 pounds to his opponent, but he stepped out on the mat with confidence after his pin in the previous round against East Ridge. He tried several times to attack his opponent’s legs, but was unable to gain the advantage. In fact, Henry Sibley was able to secure a takedown late in the first period off of a counter attack and followed that up with an escape to start the second period. Despite the 3-0 deficit, Benny continued to press the action. About halfway through the second period Benny was finally able to wear through his opponent’s defense and get the takedown. Immediately, Benny used a power half to turn his opponent to his back and secure the fall!

The Raider bench and crowd roared their approval with a standing ovation. Moments later, a forfeit victory at heavyweight for Nick Owsley gave the Raiders their first lead of the night after the last weight class.

Despite having four open weight classes and several wrestlers needing to move up a weight class to fill other spots, the Raiders were able to prevail. This was a testament to their dedication, commitment, and also to their training in the practice room. Many times, the superior condition of the Raiders is what turned the tide in individual matches where the Warriors were able to gain early leads.

CDH now has a dual meet record of 5-6 and will have a long weekend off for Christmas. The next action for the Raiders will be at the North Saint Paul Polar Duals on Friday, December 28. The Raiders will attempt to defend their title as they took the team championship at this event last year.