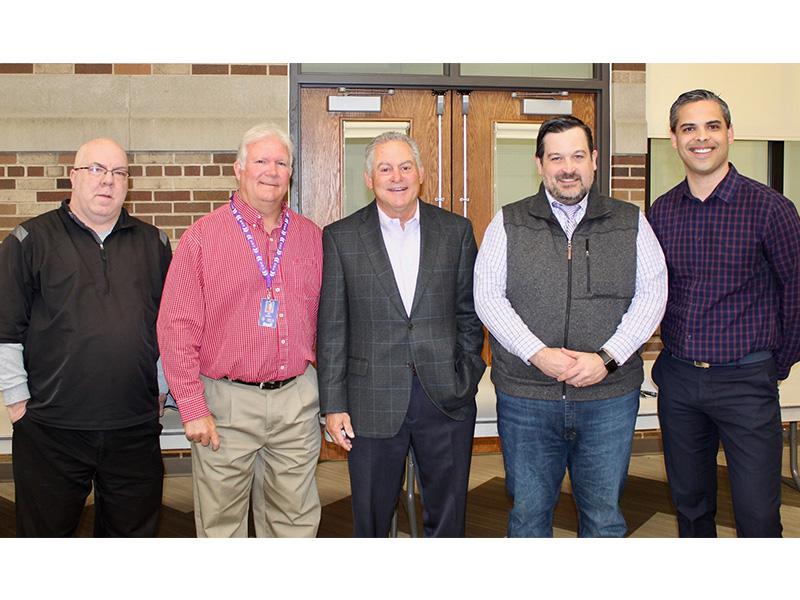 Long-time Cretin-Derham Hall hockey coach, Jim O’Neill '74, is stepping down after 38 years. During his tenure as head coach, he brought the Raiders to the State Class AA Championship in 2006, plus three Section Championships and 11 Conference Championships.

“Jim O’Neill’s nearly four decades of impact on the Cretin-Derham Hall hockey program is one of true dedication and commitment to these student-athletes,” noted Phil Archer '99, Athletic Director. “His legacy of excellence and passion for the game of hockey is unparalleled.”

Archer noted that O’Neill’s Raider hockey days, first as an alum and later as a coach, are very remarkable. He has coached thousands of young men and developed a strong program known for playing the game of hockey with class and a high standard.

O’Neill’s love of CDH fueled much of his dedication to the sport. “I feel blessed to have been able to do something I love at an institution I care so much about for so many years,” reflected the outgoing hockey coach. “I realize how unique my tenure at CDH is, and another reason CDH is so special.”

As a new era in Raider hockey begins, O’Neill thanks fellow Raider coach, Mark Rancone '71 who coached with O’Neill for many years, as well as current co-head coach Charlie Basco for making these years so gratifying. He adds, “I particularly want to thank all of my players from over the years and their families for allowing me to be a small part of their development.”

O’Neill has also coached CDH baseball for 25+ years during which the CDH Raiders have won an impressive five state championships.

New head coach Matt Funk is excited to be a part of what he calls a proud and storied tradition of hockey. “As someone born and raised in St Paul, I know how special CDH is to the community and I am excited to be a part of it! As a staff, we hope to continue to build on the legacy and championship culture that Coach O’Neill and CDH stand for. I look forward to the opportunity to help guide the future of Raider Hockey and help bring pride to the entire CDH community.”

According to Archer, the transition to the new coaching staff sets Raider hockey up for continued success. “We are thrilled that this coaching staff will bring proven track records from very impressive hockey programs.  The new CDH staff will be a uniquely dynamic coaching team,” said Archer. “With Coach Funk’s offensive skills, Coach Murphy’s defensive skills and Coach Basco’s technical skills, our hockey program will be strongly positioned for tremendous success, both on and off the ice.”