The Raiders scored the game's final five goals to secure the win and preserve their undefeated conference record. 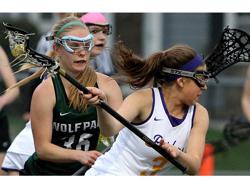 While a lacrosse game is 50 minutes long, sometimes a game can be decided in short stints, which was the case Tuesday night as Cretin-Derham Hall scored three goals in a span of 1 minute and 23 seconds to hand Park of Cottage Grove its first loss of the season.

The win gave the Raiders (5-2, 5-0) a one-game advantage over the Wolfpack (7-1, 4-1) at the top of the Suburban East Conference standings, as they kept their perfect league record intact after the home win.

“I thought it was good competition back and forth,” Leonard said about the intensity of the conference matchup. “We just kind of fell apart in the last 10 minutes there.”

The later stages of the second half was a tough stretch for the Wolfpack, as the Raiders, ranked No. 5 in the state coaches’ poll, scored five unanswered goals in the final 11 minutes of the game. Maya Quigley had two key scores for the Raiders, tying the game at 4-4 and then tallying the game-winning goal with just over seven minutes left.

The three goals in under 90 seconds came after the Wolfpack called a timeout in their own defensive zone. The Raiders increased their pressure against the Wolfpack defenders, and that was enough to change the game.

“They’re a physical team with good athletes and a couple girls just panicked when they got the ball. (They were) afraid to get out of trouble (and) just threw the ball away instead of working out of trouble,” Leonard said. “You do that against Cretin, it’s going to cost you.”

The high-press was an impressive effort by the Raiders, who were able to play at their best in the game’s waning minutes.

Reis was a big contributor to the Raiders’ success all game. She scored all three of the Raiders’ first-half goals, including a solo-effort after an interception in the midfield that Reis converted into a goal with 11 seconds left until halftime. Her teammates got her the ball often to set up offensive attacks, or to control the pace of the game, a role she says she’s “very comfortable” with.

Now that the Raiders have an advantage in the conference standings, it’s on them to maintain their lead and finish the season strong. Moss emphasized that every team will be coming after the Raiders with everything they’ve got in their remaining conference games, but he’s confident in his team’s ability to finish.

“Now that the girls remember how well they are capable of playing when they play together, I think they’ll take care of business,” he said.

Both Cretin-Derham Hall and Park of Cottage Grove entered Tuesday night’s clash undefeated in the Suburban East Conference. The Raiders (5-2, 5-0), are the only team that can claim that now, as they were able to hand the Wolfpack (7-1, 4-1)  their first loss of the season in an 8-4 home win.

The game was tightly contested, which you would expect from two league rivals jockeying for the top spot in the Suburban East. No team was able to pull away from the other, as the game ebbed-and-flowed, with each team trading goals and momentum until the second half.

The turning point came with 8:18 left in the game, when the Wolfpack called a timeout with possession in their own defensive zone. The Raiders, ranked no. 5 in the state coaches' poll, applied heavy pressure off the set piece and Maya Quigley scored what would be the game-winning goal. The Raiders scored three goals in a minute and 23-second span to take a 7-4 lead, which secured the victory.

Megan Reis was the star of the game for the Raiders, scoring all three of her team’s goals in the first half. She made key defensive plays in the midfield as well to control the pace of the game.

The Wolfpack finished with four goals from four different players. Mandy Elton stood out with a goal and an assist.