The Raiders' Maya Quigley scored the game-winning goal with 1:49 remaining. 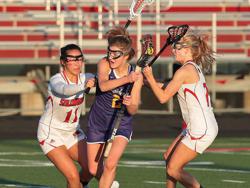 Maya Quigley (2) moves through a pair of Stillwater defenders. Quigley scored the game-winning goal with 1:49 remaining in regulation to defeat the Ponies 10-9 at Stillwater High School. Photo by Cheryl Myers, SportsEngine

When the clock hit zero on Thursday night’s girls’ lacrosse game between Cretin-Derham Hall and Stillwater, the Raiders raced to their goal to embrace each other and celebrate their win with elation that usually only comes during the postseason.

But if you look at the importance of this game, Cretin-Derham Hall’s excitement was justified despite it being the Raiders’ first game of the season. These teams will likely be vying for the Suburban East Conference championship at the end of the season and they each have a legitimate chance of returning to the state tournament.

Like many teams across the state, Cretin-Derham Hall (1-0, 1-0) had to make adjustments due to the April cold and snow. The Raiders were scheduled to open their season last Saturday against Minnehaha Academy but the game was canceled, meaning Cretin-Derham Hall had to open its season against one of its biggest conference rivals.

“This was not the ideal start to the season,” said Raiders coach Joe Moss. “We knew this would be tough. They’re always incredibly tough.”

Fortunately for the Raiders, the tall task of having to play Stillwater in the season opener was aided by their experience. Cretin-Derham Hall has nine seniors on its roster and the Raiders returned all but two starters from their 2017 team that made it to the state tournament.

“A lot of us have played together for a long time,” said Cretin-Derham Hall senior forward Maya Quigley. “We can draw on our experience to help prepare the younger girls for opponents like Stillwater.”

Throughout Tuesday’s conference showdown, the teams traded scores with neither having more than a two-goal lead during the game.

The Ponies’ two-goal lead came in the second half. Stillwater tallied three goals in less than 90 seconds to grab an 8-6 lead. With the Ponies rolling, Moss called a timeout.

The stoppage worked. Junior midfielder Anne Marie Rhoda and Quigley went on a scoring rush of their own, culminating in Cretin-Derham Hall scoring three unanswered goals and taking back the lead.

“When they adjusted we stepped up,” Moss said. “They have that experience and can step up when they’re needed.”

The teams went back to trading goals. With 1:49 left in regulation, the teams were tied 9-9. Then, Quigley buried her short-range chance to put her team ahead for good.

Following Quigley’s goal, the Raiders clamped down on defense and thwarted the Ponies’ offense. Stillwater’s best chances to tie the game came late. The Ponies hit a post with 49 seconds remaining. After regrouping, Stillwater had a chance with 23 seconds left, but had an unforced turnover as the Ponies were offsides.

Unlike Cretin-Derham Hall, the Ponies (1-1, 0-1) already had a game under their belt as Stillwater defeated Lakeville South 11-5 last Saturday. The Ponies had been dominant on defense in that win, holding the Cougars off the scoreboard for 36 minutes. Stillwater’s defense did not have the same success on Tuesday.

“Our defense is strong but they’re a pretty senior-dominant team,” said Ponies coach Rick Reidt. “Our defensive system is very complex and it’s the hardest part of the game to learn. I think this game will help our team in the long run and help us focus.”

Both teams have a ways to go and have lofty expectations after achieving previous success. An early game this highly-contested will likely benefit both teams down the stretch.

“I think winning this game sets us up for a lot more success,” Quigley said. “It wasn’t the ideal way to start the season but I think this game sets the tone for us on how we need to play.

After trading goals for most of the game, it was Cretin-Derham Hall that got the last score Tuesday night. With 1:49 remaining in the second half, Raiders senior forward Maya Quigley converted a short-range shot as Cretin-Derham Hall defeated Stillwater 10-9 in a thrilling Suburban East Conference game at Stillwater High School.

The Raiders got the win thanks to the offensive effort of Quigley, who had a pair of goals in the win, and two other scorers — senior midfielder Elise Hitchcock and junior midfielder Anne Marie Rhoda. Hitchcock and Rhoda each had four goals for Cretin-Derham Hall (1-0, 1-0).

Stillwater had its chances late but could not convert. The Ponies hit the crossbar on a short-range shot with 52 seconds remaining in the game. They had the ball again deep in Cretin-Derham Hall territory but were called for offsides with 24 seconds remaining.

The Raiders were helped by junior goalie Kaelie Smith, who made six saves in the win. Stillwater senior goaltender Kinsey Weyer made seven stops in a losing effort.