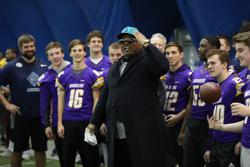 Every year, the Super Bowl Charity Flag Football Game is played in the host city ahead of the big game. The Wounded Warrior Amputee Football Team (WWAFT) competed against the NFL Alumni Team in the annual Game of Honor on January 31, at Concordia University’s Sea Foam Stadium.

The Wounded Warriors Amputee Football Team, comprised of Iraq and Afghanistan conflict amputees, competes across the country to show everyone that “the loss of a limb doesn’t mean the end of an active life.”

Cretin-Derham Hall students were honored to be asked to support the game in a number of ways. LTC Jamie Fischer, JROTC, said that the school’s opportunity to support the event was, “an honor because it provided a real way to recognize the veterans’ sacrifices and resiliency. It was amazing to see the wounded warriors move with agility and fearlessness. It reminded us that there is almost nothing that we cannot overcome.”

Members of the CDH Dance Team, Bailey Collmann’20, Winnie Do’20, Gina Neumann’19, Natalie Scott’21, Lauren Smothers’21, Mollie Taft’21, and Bella Tambornino’18 also brought their energy and enthusiasm to the fans during the pregame.