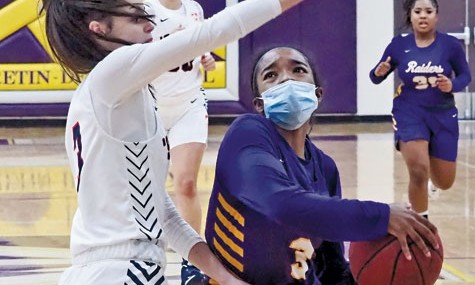 “You’re too young.” “You’re too small.” Beginning with an 0-6 record, it seemed as though the skeptics were right. With only four returning varsity players and five upperclassmen in the entire CDH Girls Basketball program, the odds were stacked against the team. Despite the circumstances, the team persevered. What they may have lacked in experience and size was made up for with determination and grit. And, when 2022 brought new opportunities for success, they were prepared to make the most of them.

The team felt the lengthy practices, grueling workouts, and hours upon hours spent in the film room starting to pay off when the final buzzer sounded on January 4 and the girls secured themselves a win at last, defeating Woodbury 61-41. Every player scored, with double-doubles from Lauren Bengtson ’24 and Lily Hahs ’24.

“I knew from the moment we stepped on the court that that game was going to be different,” said Captain Anna Caruso ’22. “The energy was contagious from start to finish, and with every point we added to the scoreboard it grew. It felt like we were finally starting to turn a corner. Our coaches have always said collective hard work will pay off, and as we got on the bus to leave Woodbury, I felt that we truly believed it.”

This certainly proved true as the girls proceeded to defeat Irondale a few days later 69-51. With Bengtson dropping a career high of 24 points, followed by double-digit scoring from Ray’ven Robinson ‘22 and Caruso, the team was headed in the right direction. The one thing we have never doubted is our team’s heart.

Our team slogan this year is #WEoverme and the girls have really embraced that message and have stuck together through our tough start. Our coaches have worked diligently to slow things down and even reevaluate our offense to best fit the players we have this year.

“All of these things have played a part in our success as of late,” Head Coach Crystal Flint remarked. “While the coaches work hard, we emphasize the team being player-led and our Captains this season are the best I have had in my seven years of coaching. They are truly an extension of the coaches and it is invaluable to our team chemistry, and for that I am grateful. I love these girls; they are really good people.”

As great as the wins have felt this past week, the team is more process-oriented rather than focused on the results. Spanning from November until March, basketball is one of the longest seasons. So, a tight-knit program is key in enduring all of the peaks and valleys that the season brings. Ask any CDH Basketball player what she enjoys most about being on the team and you will be guaranteed the same answer: the people.

“Being a freshman on the team is something that is a little challenging,” shared varsity player Emma Dornan ’25, “Something that I’ve learned is to get super close with all of your teammates. Creating tight bonds with the basketball team has helped me because it makes the season a lot more fun!”

The team has had countless opportunities to grow and bond. From packing rice and vegetables at Feed My Starving Children to finding their inner artists on retreat at Camp St. Croix, the natural chemistry cultivated off the court is what makes this team special.

“Everyone on this team truly cares about one another. No matter someone's position, grade level, or achievement, we all recognize that each and every person is essential in their own way,” said Captain Allie Sowatzka ’22. “We all bring something different and unique to the table, and never before have I been a part of a team that accepts and uplifts one another to this degree.”

It is not only the athletes that make this team special, but also the coaching staff who bring knowledge not only about the game of basketball, but also about life. With coaches Crystal Flint and Nia Hollie working within the school, the girls always have an outlet of support whether or not their issue is basketball related.

“As I’ve only been here for a short amount of time, the belief the coaching staff has in me is a blessing It really is bigger than basketball, all around,” said Robinson, who transferred to CDH last year

The coaches care about the girls beyond who they are as athletes and help prepare not only good players, but genuinely good people. Because the fact is, high school basketball is only a four year experience, and the qualities the girls are learning now will stick with them for life.

Come support the CDH Girls Basketball team in the remainder of their 2022 season to watch them continue to grow and succeed!