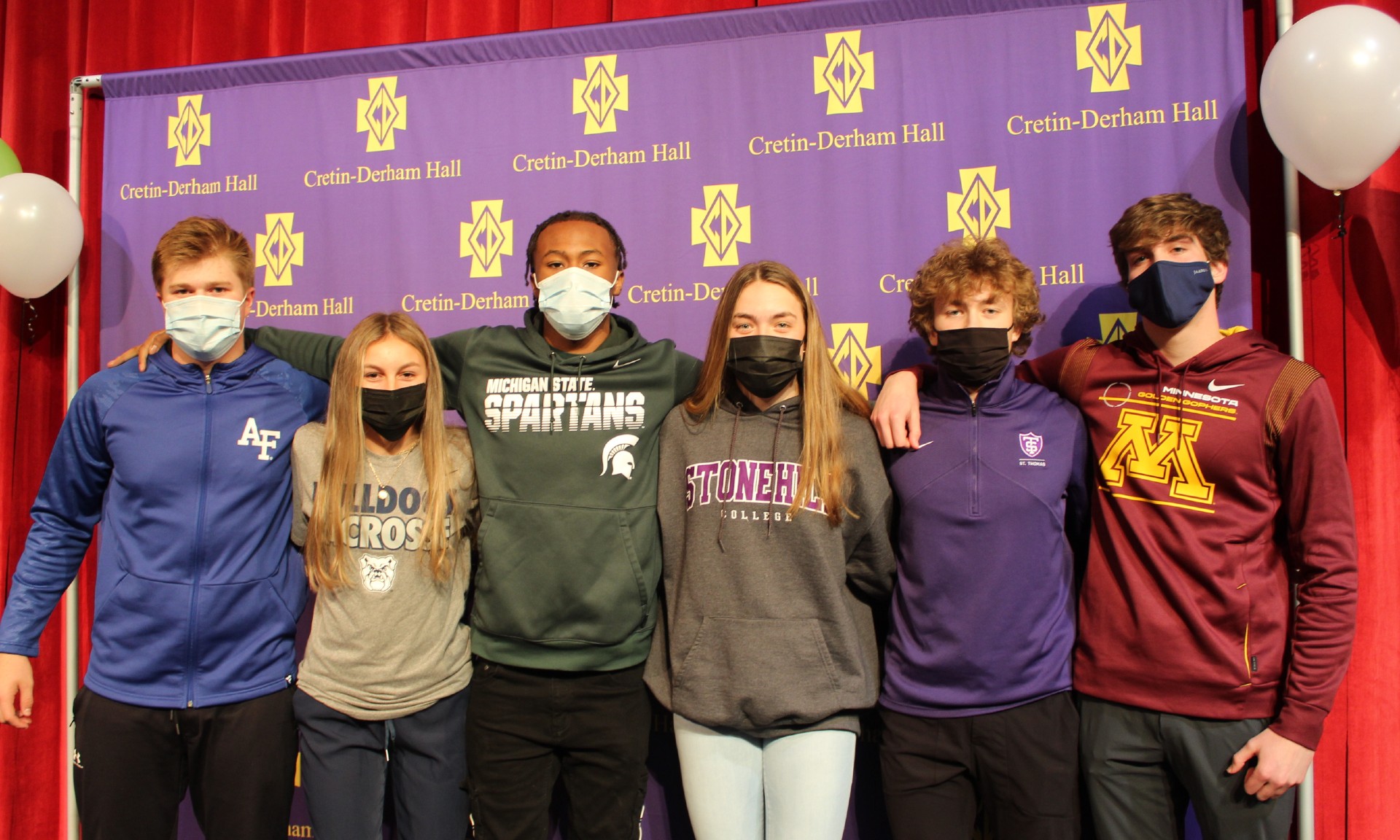 “This day means a lot to me because I have been working hard to be able to play at the next level for years now,” said Tre Holloman ’22, who will play basketball at Michigan State University. “It is great that our community can come together to celebrate my classmates and I living out our dream.”

Holloman is a nationally-ranked guard who averaged 21 points per game last season in leading the Raiders to the state championship game.

“Tre Holloman has been our starting point guard since 9th grade, and he continues to improve his game by working tirelessly to get better everyday,” said Coach Jerry Kline ’93. “I have not coached anyone with more leadership skills, drive and determination to not only be a great player but also a great teammate, it has been a true pleasure to coach this young man and I can’t wait to see what the future holds for him.”

Lily Geist ’22, who has led a resurgence of the girls hockey program, will play hockey for Stonehill College in Easton, MA. Geist led the team last season in points (26) and goals (16). “Lily Geist is a high character leader as a student-athlete with amazing skills and abilities! She possesses game changing speed and strength,” said Coach Tony Scheid. “Lily has a very high hockey IQ and possesses one of the hardest shots in the state. She leads by example with her persistent and determined effort in the classroom and on the ice. Lily plays hockey with passion and enthusiasm - she’s a joy to coach!”

Luke Leonidas ’22 will swim for the University of Minnesota next season. Leonidas has been a decorated swimmer for the Raiders earning All-State honors as well as breaking individual records that have stood for nearly 15 years.

Luci Selander ’22 will play women’s lacrosse for Butler University in Indianapolis, IN. Selander was a point machine for the Raiders last season tallying 99 points on 85 goals and 14 assists. Selander was named All-State last season.

“Luci has played a huge role in the CDH Lax program’s success in the last three years. She will be a four year starter as well as named team captain two years in a row. Luci is one of the hardest working kids I’ve had the chance to coach,” said Coach Sheala Osborne ’15. “She is always looking to compete whether that is in practice or games. This hard work can be seen in her stats, in the two full seasons she has played, she has over 100 goals,30 assists and 75 draw controls. Luci is also an awesome team player who is always eager to teach/coach new or younger players the game of lacrosse. Luci’s hard work, skill and leadership will be greatly missed next season! I can’t wait to see all she accomplishes on & off the field at Butler!”

Cooper Smith ’22 will play baseball for the University of St. Thomas in Saint Paul, Smith was 3-1 last season with 1.35 ERA and 58 strikeouts in 46 innings pitched. "Cooper is an incredibly talented athlete that has a bright future ahead of him both on the mound, as well as off the field, at the University of St. Thomas.  His overall athleticism, ability to learn the game, and his fearless approach to pitching will continue to set him up for success on the field.  With a great family and excellent achievements in the classroom as well, Cooper will continue to be a great example of a true Raider athlete."  said Head Coach Mike Kvasnicka

Ben Weber ’22 will play baseball for the United States Air Force Academy in Colorado Springs, CO. Weber struck out 55 batters in 50 innings while posting a 2.94 ERA. "A natural born leader, Ben's unmatched work ethic, high character, and selflessness are all invaluable assets to his Raider Baseball team.  A student of the game, Ben has limitless potential as he will undoubtedly combine his natural athletic ability with tireless training and development.  The Raider Baseball coaching staff couldn't be more proud of Ben and excited for his future at Air Force Academy and thereafter.  Ben has proven to be a poster-child for what CDH Athletics is all about - high achievement in the classroom, on the field of play, and in life." Kvasnicka added.

Congratulations to these outstanding student-athletes as they embark on the next chapter of their life. The CDH community wishes you the very best of luck.