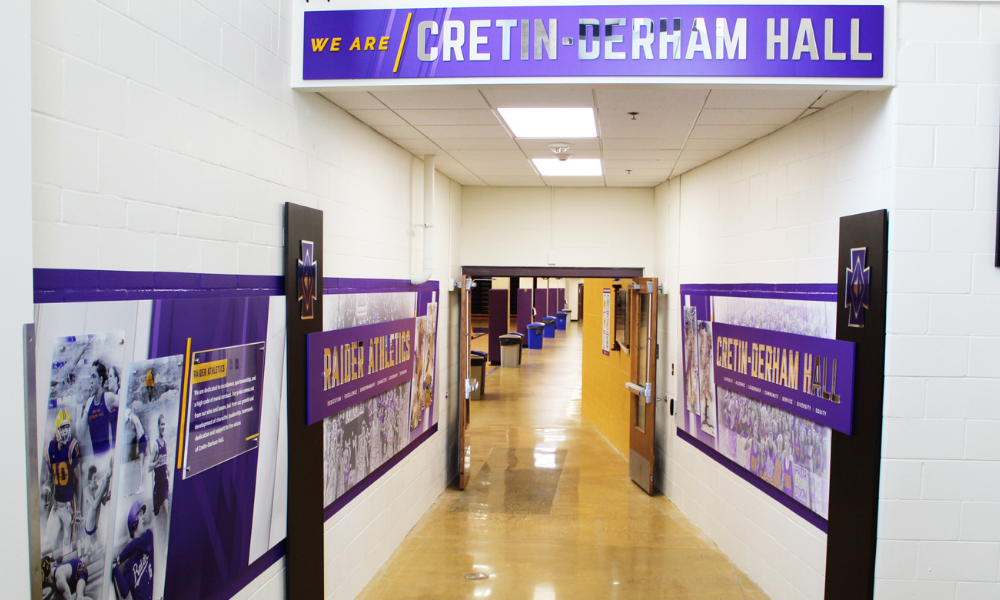 The new Athletic Wall of Excellence at Cretin-Derham Hall was officially unveiled last week outside the entrance to the Joe Mauer Field House.

The wall features photos of CDH’s athletic successes and will serve as the cornerstone of the enhanced CDH Hall of Fame that we plan to begin work on in 2021. The project's genesis stemmed from recent improvements and additions made to Cretin-Derham Hall that made the school's previous athletic wing obsolete.

"After the 2001 athletic facilities additions it really changed the walking traffic and where people went when they attended an event at CDH," said Athletic Director Phil Archer ‘99. "The athletic wing was basically tucked away after we switched primary gyms, so no one really walked by our trophy cases or got a chance to see any of the awards we were showcasing unless they knew it was there and went out of their way to go see it.

"With the addition of the new Lentsch Forum, we wanted to create something more modern that would be easier to maintain and update that would also catch people's attention whenever they walked into the building."

After getting design proposals from several vendors, the school decided to go with KJ Branding, which specializes in creating athletic murals. "We wanted a WOW factor and they delivered," said Archer. "The mural on the wall allows us to showcase former players, coaches, and teams. We are very excited we have created a platform to tell the rich story of Cretin-Derham Hall Athletics."