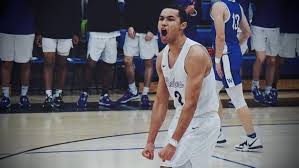 The Cretin-Derham Hall Boys basketball team retained the Archbishop John Ireland Trophy with a dominate win at Saint Thomas Academy 79-38 Friday in Mendota Heights. The Raiders have held the trophy all three years of existence. The win also marked the 16th consecutive win for CDH in the series. STA last won in 2005.

The Raiders (7-1) started the game up 11-0 which included a huge slam dunk from J'Vonne Hadley '20 on the opening possession of the game to set the tone. Hadley had a game high 23 point on 10/15 shooting including 6 slam dunks in only 19 minutes of play.

After another run to open up the second half, the Raiders subbed out their starters with 14 minutes remaining.

CDH is currently ranked #2 in Class 4A and returns to action Friday night when they meet Wayzata at the UST Classic. Gametime is scheduled for 7:45 p.m.